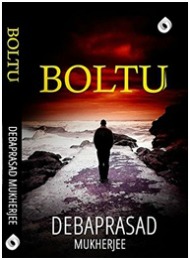 At a tender age of ten when most other boys are cuddled and cared, Boltu used to plan petty thefts and did not care when got caught. He smoked; he got entangled in brawls and thought his self to be a man of the world, caring two hoots for regular pursuits like academic activities! Things worsened as he grew up. He tricked people, got into wrong company and registered himself as a small-time hoodlum. Yet there was a subtle difference; the boy could dream, he could sing as well! He wanted to give the inane ‘Boltu’ a name to be awestruck with. Unlike others, he had the determination and resilience to stick to his aim; only not being sure which route to follow. His concepts hovered like a maze around him. Amongst the jagged pathway of life, two persons stood like refreshing oasis; Madhab, his childhood friend, and Poly, his beloved. Whereas they remained like gushes of fresh air to him, that hardly could help diverging the misadventures of Boltu. Then came the devastating truth of his life; Fotu-babu, the man he knew to be his father all the eighteen years of his life, was not his biological father at all. Boltu was made of tougher material than others as he absorbed the shock and went on to loot an elderly doctor. His, and others’ life kept taking newer turns, though far from finding a mooring. Under the patronage of Dr. Bishwaroop Mohapatra, Boltu learned the value of leading an honest life. Yet the flare to do something worthwhile kept haunting Boltu. One day he suddenly took a decision through a momentary surge of blood in his brain. It was this decision that carried him all the way towards his long cherished goal. Often we tend to see that the greatest of decisions are taken on one’s own. Influences keep trickling around; yet, the final take belongs to the individual. It happened to the protagonist of this novel as well as to the other characters therein. They sail through the ups and downs amongst variegated shades of emotion in the austere backdrop of small-time towns in India with occasional glimpse of Kolkata (hitherto Calcutta) over a period spanning from 1971 to 1989. Boltu grows up to a man; as do you, I, and many others; only to differ in intensity.